Again my lack of a formal (i.e. any) Computing Science education gets the better of me.  What is the difference between a Function, a Operation and a Method? (I think I half know some of them, but half-knowing has already got me into trouble.)

In computer programming, a subroutine is a sequence of program instructions that perform a specific task, packaged as a unit. This unit can then be used in programs wherever that particular task should be performed. Subprograms may be defined within programs, or separately in libraries that can be used by multiple programs.

In different programming languages a subroutine may be called a procedure, a function, a routine, a method, or a subprogram. The generic term callable unit is sometimes used.[1]

As the name subprogram suggests, a subroutine behaves in much the same way as a computer program that is used as one step in a larger program or another subprogram. A subroutine is often coded so that it can be started (called) several times and/or from several places during one execution of the program, including from other subroutines, and then branch back (return) to the next instruction after the call once the subroutine's task is done. 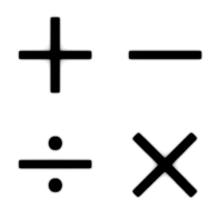 In its simplest meaning in mathematics and logic, an operation is an action or procedure which produces a new value from one or more input values, called "operands". There are two common types of operations: unary and binary. Unary operations involve only one value, such as negation and trigonometric functions. Binary operations, on the other hand, take two values, and include addition, subtraction,multiplication, division, and exponentiation.

Operations can involve mathematical objects other than numbers. The logical values true and false can be combined using logic operations, such as and, or, and not. Vectors can be added and subtracted. Rotations can be combined using the function compositionoperation, performing the first rotation and then the second. Operations on sets include the binary operations union and intersection and the unary operation of complementation. Operations on functions include composition and convolution.

In object-oriented programming, a method is a subroutine (or procedure) associated with a class. Methods define the behavior to be exhibited by instances of the associated class at program run time. Methods have the special property that at runtime, they have access to data stored in an instance of the class (or class instance or class object or object) they are associated with and are thereby able to control the state of the instance.[1]

So where does that leave us?  Operations are disambiguated quite simply – they are a sub-set operators.  Functions are a more general name for Methods, which is tied to Object Oriented programming. Excellent.